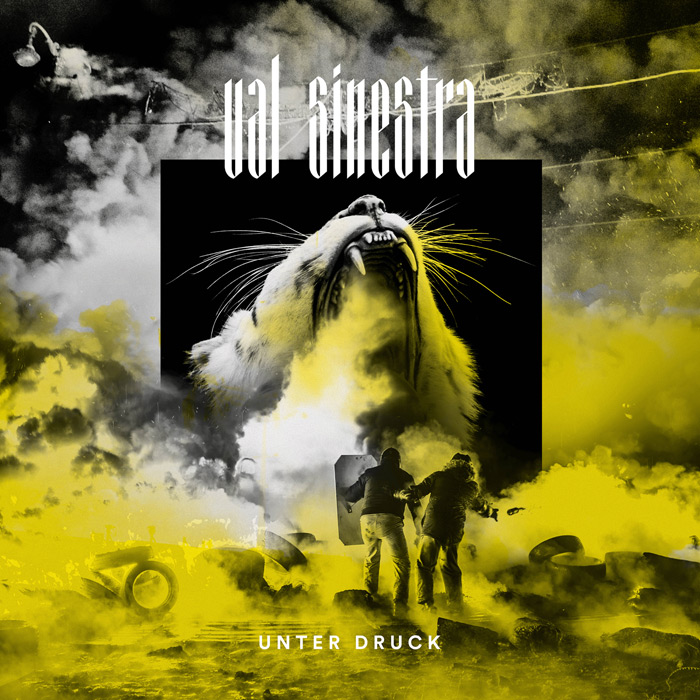 "Val Sinestra (lat.-ital: left valley) is a small and quiet valley located in the Swiss Alps.”

In Berlin, VAL SINESTRA is a hurricane of energy - a hardcore-rock’n’roll band, that started out with a chaotic mix of punk rock, hardcore, stoner and rock’n’roll, until a few changes in members and genres ended up in VAL SINESTRA’s very own style.

Founded in 2011, they released their first six track EP four years later - immediately, praise and good critiques started to come in: "Six strong songs by these Berlin newcomers. Behind a rough sound that is close to bands like THE BRONX and KRAFTKLUB, one can sense undeniable potential" (VISIONS Magazine). This comparison might be surprising, but is actually right on point - VAL SINESTRA are unique in their sound: International influences paired with German lyrics that are honest and not embarrassing at all. And this combination sticks out of the mass.

Now, one and a half years later, they will finally release their debut album. ”Unter Druck“ (engl. under pressure) holds 11 tracks that are a seamless progression from their first EP in skills and style. The album title sums it up pretty well: the lyrics and music immediately fills up your head and makes your feet itch. “Everyone feels under pressure sometimes“, explains Max, bassist of the band. ”And then you need a space to let it all out. For us, it’s music, especially playing live... you can shut off your thoughts and let everything out – before the pressure inside becomes too much.“

Even though VAL SINESTRA’s sound, frankly speaking, invites to get wasted to, their lyrics have nothing to do with partying or drinking. They talk about personal issues in songs like ”Nichts hält mich auf“ (engl. nothing can stop me) or ”Auf der Suche“ (engl. on a quest). But they also offer criticism, such as in “Skandal“ (engl. scandal), ”Kein Argument“ (engl. no argument) and most of all “P.A.N.I.K.“ (engl. panic): “PANIK probably is the most political song on this record. It’s about opinions of friends, acquaintances or family members that are just puzzling. A lot of people follow their own impulsive feelings instead of looking at facts“, adds singer Chris. “It’s an angry soundtrack for people that despise ignorance, but try to look into a positive future.“

“Unter Druck” was recorded by Jag Jago in the Brighton Electric Studios. Being a past member of THE GHOST OF A THOUSAND, producer or engineer in recordings of bands such as MASTODON, JOHN COFFEY and YOUR DEMISE, Jag Jago was a perfect fit for this album. Fittingly, its artwork is also ‘made in England’ – artist Thomas Lacey took the record’s title and reinterpreted it visually in his very own way.